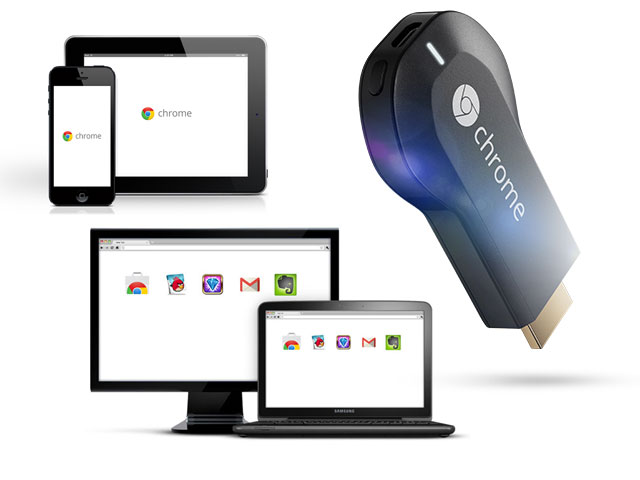 The Farmhouse got a new device this past week. We ordered the ‘Chromecast’ USB device that let’s you stream media from other devices to the TV. So, we have an iPad and a few iPhones. Now we can pull up the Netflix or YouTube app and stream whatever movie or TV show right to the TV we want.

From 2005-2010, the Farmhouse did not have ‘any’ TV. I had the physical box, but no live TV or Satellite. Ah, the good ‘ole days. In 2010, we got DirecTV and paid our $70 per month for 100+ channels of crap. We watched HGTV, House Hunters and Chopped, mostly. Somewhere along the 2005-2010 timeline, we got an XBOX. I had Netflix at the time and streamed video through the XBOX. It worked, but not well and not if anyone else was using the Internet at the time. Since we had DirecTV, I cancelled the Netflix streaming service (right around the time everyone else did too…remember that Netflix Quickster thing?)

Last Christmas, we got a device that will display what you are watching on the iPhone or iPad to the TV. Well, wouldn’t you know that Apple upgraded their connectors and now it only works with the large connectors and not the new thunder-cable compatible ones.

In the spring, we tried out HULU Plus due to Dowton Abby for about a month ($7.99/mo.). It worked well with the iPad device to get to the TV for viewing, but there wasn’t enough variety for us.

Over this past summer we got Amazon Prime, mostly for free shipping reasons, but it did come with access to the Amazon library of streaming TV and Movies. Again, we used the XBOX to stream video to the TV as Amazon Prime currently doesn’t work with the iPad or iPhone with the TV. We get logged out of Prime at least once per viewing. Very annoying.

The Chromecast service doesn’t currently work with Amazon Prime, but does work with Netflix and YouTube. I took the plunge with Netflix again and signed up for the streaming service. We also decided to get rid of the DirecTV service at the same time. My hope is that Amazon Prime will see the opportunity and join the Chromecast family of offerings. We’ll have to wait and see.

Ok, so now we paid $80 for Amazon Prime for a year. Netflix is $7.99 per month. That’s about $180 for the year for access to TV shows and movies via two outlets. In comparison, DirecTV at the basic level was $30/mo. At one point I had the $90/mo. package. Conservatively, that’s over $350 for a year’s worth of programming that we were barely watching in the first place.

Currently, we’re watching the first season of ‘The Tudors’ and the Netflix-produced ‘Orange is the New Black’. We’ve also watched a lot of crap movies already on Netflix.

Also, we don’t get disconnected or have buffer time moments like we do when we stream via the XBOX. So that’s been great.

So, I came across this in Wired Magazine. Basically, the 5 million US households that get TV over the Internet – and don’t have a cable or satellite subscription are called ‘Never-Connecteds’. Generally, these households are made up of 35 and younger folks with no kids. Never-Connecteds get their entertainment a la cart through Amazon and Netflix.

So, while the Farmhouse has been connected in the past, we’re now a household of Internet streaming media only. No “Scott Swan” on Channel 13 at Noon which is the only thing we miss.